After a call came in from a client saying that there was a squirrel inside of their garage and refused to leave even with the door left open, Ray rushed over. Once on site, Ray met with the owner and was shown into the garage where he began his search. After a short chase through kids toys and gardening supplies Ray successfully grabbed the squirrel with his bare, technically gloved, hands. Because the client is an active member of the United States Military (Marine Corps) he received a discount for the emergency service call. 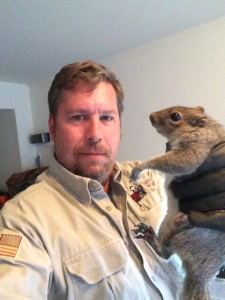