Groundhog (Marmota monax)
Also known as woodchucks in Westchester they are large rodents; with adults weighing between 5–10 pounds. Woodchucks have heavy, short legs with long claws for digging burrows. Being a herbivore they eat a variety of plant life including vegetables, flowers and fruit trees. This makes woodchucks a nuisance to both regular and avid gardeners. They will also burrow under structures, porches, decks and outbuildings. The average life span of a groundhog is two to three years. Their reproductive period is a short one spanning from early March to late April. The average litter can have from two to six young. After about five to six weeks the young will move out and find their own dens. 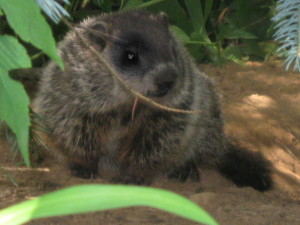 In Westchester, woodchucks can damage numerous areas around your home. From embankments to foundations, decks & porches to the vegetables and flowers in your gardens. No matter how cute groundhogs look, don’t be fooled by these digging machines. Woodchucks incessant digging can create a void under decks and porches. Areas around pools both in ground and above are fair game. Groundhogs found digging and making dens under above ground pools have been found and removed. In some cases woodchucks will burrow into the dams of ponds or levies causing the soil to become weak and erode, potentially collapsing. Older homes with a fieldstone or block foundation can be compromised by woodchucks digging next to the foundation and excavating the soil.

In one case, a woman called to tell me a woodchuck was in her basement. When we arrived and inspected the basement we found part of the old stone foundation had fallen in. The woodchuck had made a hole big enough to gain access to the basement. After a heavy rain the compromised area partially collapsed. Upon setting up multiple live traps, several woodchucks were removed and the foundation was repaired. We have even seen stone walls and rock barriers collapse the result of woodchucks burrowing and undermining the soil creating a weak area.

Caddyshack got it right! Golf courses and horse farms are enticing homes to woodchucks as well. Unfortunately they are no friend to horses, golfers and golf carts. Woodchucks continuously dig holes and burrow under the ground. These tunnels make the ground surface very weak. Horses and people walking can step on theses inconspicuous weak spots causing injuries to the leg. Golf carts driving over the holes can become damaged as well. Call us today for woodchuck removal Westchester.

Although they can be considered for Rabies it is very rarely seen in Groundhogs.

Intrepid Wildlife Services provides woodchuck removal in Westchester County through a humane live trapping program. Woodchucks can be difficult as a result often times we will have to set up traps near their burrows in order to capture them.

We can also make barriers, which will prevent woodchucks from entering decks, porches and foundations. These are customized specific to the structure. We have a variety of techniques and equipment for this service which vary depending on the property.