Known also as Field Mice and Meadow Mice in North America. Voles are a herbivore (eats vegetation) and as a result can cause damage to any and all vegetation on a persons property. On average a vole can grow anywhere from three to nine inches in length and can have up to ten litters per year which can result in up to 100 offspring per year. Because of their burrowing tendencies voles are often mistaken for moles. Their lifespan is typically between three to six months but can, rarely, live up to one year. Close to 90% of voles will not live past a month. 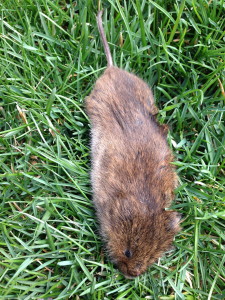 Since voles are mainly herbivores they will target plants, bulbs and roots. Often time they will girdle small trees and shrubbery at their base which can kill the plant. Voles often move underground and as a result can target roots and bulbs for plants killing them as well. 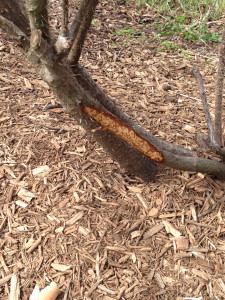 Aside from their destructive tendencies towards plants they also can cause damage to a homeowners yard. Quite often Intrepid will receive a call from a client saying they have mole damage. Upon arrival, through our inspection we will determine that it is not moles but voles. Typically voles will tunnel but not on the same level as a mole. Mole tunnels will push the soil up to the surface. In addition to using mole tunnels, Vole tunnels generally are only a hole(s) into the ground. As soon as the snow melts in the early Spring season homeowners may see what looks like surface tunnels through the grass which looks like a road map or runways almost as if someone had taken a rope and dragged it through the grass leaving snake like trails.

Intrepid has had years of experience removing both voles and moles alike. We have had clients that have had large scale tulip plantings which were being continuously damaged by voles. Trapping at these jobs often resulted in upwards of 40 voles being removed in a time span of ten days.

Once the preliminary inspection is complete and we have targeted travel corridors and entry tunnels we will set up a specific trapping system and remove the voles daily. Typically this can last anywhere between a week to two weeks deepening on the level of infestation.

Much like the mole there are no true way to prevent voles Because of their short lifespans voles can be on your property one week and be gone the next. One can stay ahead of voles by keeping an eye on your property and calling immediately after the first sign of damage is seen.