Skunks stink, plain and simple. But that doesn’t mean that your home has to. If you have skunks Intrepid Wildlife Services can remove them safe and effectively with humane trapping techniques. Sometimes we will receive calls about skunks spraying the family dog or spraying below a porch or low hanging deck. They burrow under decks to seek shelter, nest and have young. 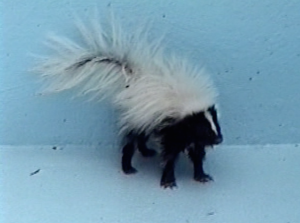 Aside from their smell skunks can wreck havoc on lawns during the Summer and Fall months when they search for larvae to eat. In addition they will create burrows which can undermine foundation and supports for decks, porches and crawlspaces.

If sprayed directly, can result in nausea, vomiting, temporary blindness and general disorientation.

The most common danger skunks pose to humans is the Rabies virus, an extremely fatal disease. Rabies targets the central nervous system and ultimately the brain resulting in death within days if left untreated. Because skunks tend to be aggressive and disoriented when confronted, it is important to minimize the chances that any humans or pets in the home may end up being bitten or scratched by the animal. Rather than confronting or attacking the intruder, call Intrepid Wildlife Services immediately for raccoon removal Westchester, NY. If you are bit by a bat seek medical attention immediately. 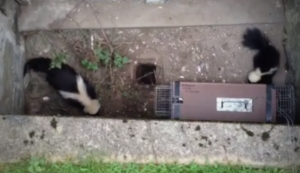 Skunks breed in late February to March. Their young are born from late April into May with an average litter of 5 kits. In the summer to fall, skunks will damage lawns in search of larvae and other insects, which serve as their primary food source. Skunks often den under decks, porches and sheds. While skunks are considered a rabies vector, the most common problem associated with skunks is their odor. 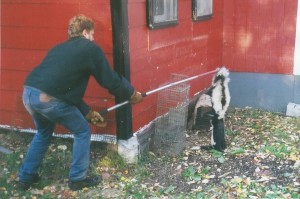 In most cases we are called to remove skunks because of the odor. Usually skunks are found in window wells, below decks and porches and inside large holes which they use for dens. Because skunks are not adept at climbing they are often unable to get out of stairwells, window wells and other steep structures. Skunks are live trapped humanly and are then released in pre-designated areas away from your home.

Intrepid Wildlife Services can prevent skunks from denning under buildings and accessing other structures by closing off the area. Materials used include a high quality wire mesh, built to last for 10+ years. Additionally, we can provide exclusion solutions for window wells and out buildings. Call us today to learn more about our skunk removal Westchester services.

This deodorizing solution really works and is safe for humans and pets.

Mix in a plastic bucket and wash affected area. Keep solution away from eyes, mouth and nose.

Location: Scarsdale, NY Job Type: Skunk Removal October 2015 The caller described a strong skunk odor the night before the call which seemed to be occurring every few weeks. Shortly after we went over for an inspection which yielded a … END_OF_DOCUMENT_TOKEN_TO_BE_REPLACED

Location: New Rochelle, NY Job Type: Skunk Removal July 2015 A client who had used us earlier in the year to remove skunks from his shed called on a Sunday afternoon to say that he just saw a group of … END_OF_DOCUMENT_TOKEN_TO_BE_REPLACED

Location: Ossining, NY Job Type: Skunk Removal A caller was complaining of an odor, she had looked out one of her windows and actually caught two skunks breeding in her yard. Upon our inspection a hole was located underneath a … END_OF_DOCUMENT_TOKEN_TO_BE_REPLACED

Location: Armonk, NY Job Type: Skunk Removal March 2015 A client had gone on vacation for a week and returned home to find a skunk foraging on birdseeds from their bird feeders during the day. In addition the skunk seemed … END_OF_DOCUMENT_TOKEN_TO_BE_REPLACED

Location: Cortlandt Manor, NY Job Type: Skunk Removal, Emergency Services March 2014 We answered a call about a dead on a clients property during the day. Seeing as this was not a priority Ray had schedule for its removal later … END_OF_DOCUMENT_TOKEN_TO_BE_REPLACED

Location: Ossining, NY Job Type: Skunk Removal February 2014 A client had described a very strong skunk odor in the front part of their house by their living room. Through an inspection Ray found a tunnel system under the snow, … END_OF_DOCUMENT_TOKEN_TO_BE_REPLACED