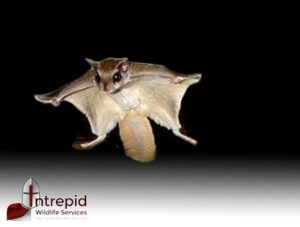 We were contacted about running and scratching noises in ceiling heard above a bedroom. During the inspection we found an entry point between two rooflines. Our experienced animal removal technicians determined that the noises heard at night were from Flying Squirrels. We offered a squirrel exclusion program consisting of installing a one way door over the entry point which allows the squirrels to exit but not be able to re enter the home. After a few days with the device in place and no further noises heard, we removed the squirrel exclusion device and sealed the hole.

Scratching and running sounds in the ceiling could be any number of rodents, bats or birds. Call intrepid wildlife services for all of your animal removal needs.

Check out some more of our squirrel removal jobs here.