The cable guy came out to install a cable through an attic space. Upon entering the attic he saw squirrels running around. He informed the homeowner who then called us. We arrived at the site to start the inspection. During this inspection Ray found what he considers the largest squirrel nest he’s seen during his 21+ years working with squirrels. The client signed up for a one week trapping program which saw three males being captured and removed. Afterwards the entry point, an open cupola, was closed off preventing any further squirrels from entering. 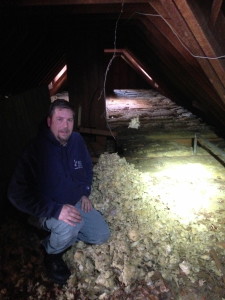