A call was received asking about woodchuck removal. Ray went to the site. Once there, Ray discovered that the woodchuck had burrowed up underneath a very small crawl space in the front of the client’s house. A live trap was set up to capture the woodchuck. By 5:00pm we received a call saying there was a woodchuck captured and waiting inside the trap. 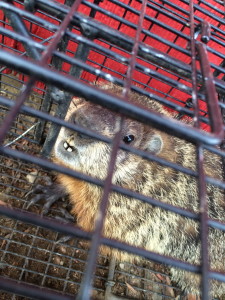