A client had hired roofers to patch a hole in a home. However they found out that a female gray squirrel was using it to enter the home. This squirrel was entering through the soffit next to a chimney. It was believed that the squirrel was raising her young and that a nest was within the confines of the house. Once Intrepid removed the female was removed the roofers came out to the site to replace a facia board. When the old board was taken off Ray climbed up and located the elusive nest and removed four young squirrels who were subsequently reunited with the female. 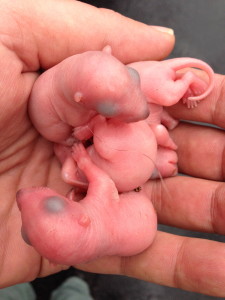