A client contacted us saying that his tenant was complaining about animal noises coming from the attic. Upon inspection we determined that the noises were a result of a squirrel infestation. Apparently the structure had squirrels before and a contractor had attempted to stop the squirrels by closing off the hole. However, the squirrels had made another hole next to the original patched off one because they were never properly removed before the repair. We removed about eight squirrels over the course of a week and closed off the hole to prevent any other squirrel from entering.

A client was preparing to have solar panels installed when workers banged on the roof and saw four squirrels run out of the roof line. During the inspection a large gap was found between the shingles and the gutter. A trapping program was set up resulting in six squirrels being removed. After the removal and there wasn’t any other sign of them inside the entry way was closed off using aluminum trim stock. 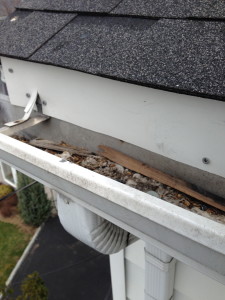