A pest control company had set bait station and mouse traps believing noises that a client had heard were from mice. The client called and stated that the noises were definitely louder than mice, we arrived and did a thorough inspection that revealed squirrel tracks on top of duct works along with insulation dug up for nesting. Additionally, an entry point was located above a gutter. A few traps were set which successfully caught six gray squirrels which were removed and relocated. After ensuring no further activity for several days aluminum trim stock was installed over the hole to prevent any other wild animals from entering the house. 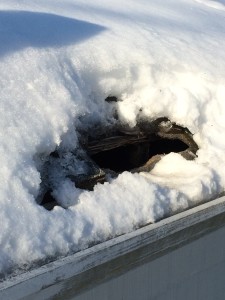