We received a call from a client with a Squirrel in the immediate living space. We arrived to the home within a half hour. Once inside we located the squirrel in a bedroom. The squirrel then made its way into an attached bathroom. There we were able to capture and then remove said squirrel. We found duct work that was exposed in an adjacent room which allowed squirrels to enter the living space from the attic. After we inspected the attic we were able to verify that squirrels were using it as a den site. After setting up a trapping program we were able to trap and remove three squirrels from the property. 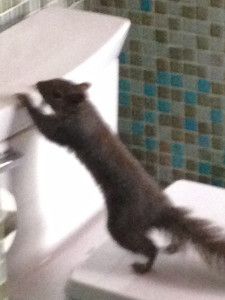 We had a scheduled appointment to remove bird nesting material from a clients bathroom vent. Once inside, we used a special nesting removal tool to extract it from the bathroom venting system. We also used a fiberoptic scope to inspect the vent from the outside to insure that all of the nesting material was completely removed. Shortly after we installed a stainless steel vent cover over the vent’s outside opening to prevent any future birds or wildlife from gaining access.