On a Sunday morning we received a call from a client stating that they had seen a bat in their bathroom. We arrived at the scene within a half hour and went into the bathroom. There we located a bat hanging from the recessed lighting. We removed the bat and found that it had entered the bathroom through a vent system. The duct work was disconnected in the attic which allowed the bat to climb through and down into the bathroom. Through our inspection we found in infestation of bats in the attic. A bat proofing program will start once warmer temperatures allow. The bat was removed and tested for rabies. It came back negative. 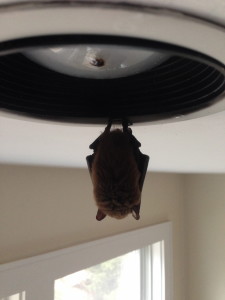 A call was received in the morning from a client who had a wild raccoon in a bedroom, we immediately responded. The client said when she woke up in the morning and went into her bathroom she found the raccoon in the bathtub. She quickly closed the door to keep it in the room. We arrived with a catch pole, cage and bite resistant glove and entered the bathroom to capture the raccoon. After securing the raccoon in the truck we interviewed the client and then noticed raccoon tracks on the floor which led from the cat door. We recommended a cat door that opens by collar only so that only pets can use it and nothing else! 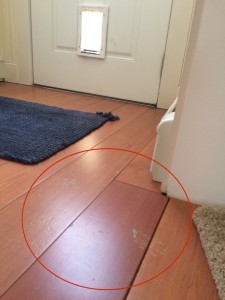 10:30 on a Saturday night Intrepid received a call about loud noises coming from the ceiling of a bedroom. We arrived on scene within 45 minutes and went up into attic. Upon entering we discovered that the bedroom ceiling had a higher roof over an old roof which made it harder to gain access to. No large animals were spotted. We then went outside to inspect the exterior of the home to see if there were any access point. When nothing was found we scheduled a time the following day to inspect during the daytime. During our Sunday inspection we found some strange disturbance; tracks on top of duct work coming from the attached garage area. We then set traps and the following day found a possum. It is quite unusual to find a possum inside of an attic as they are more of a ground animal. 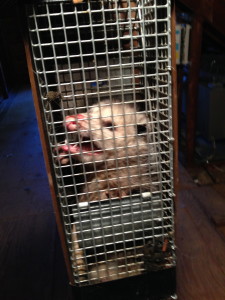 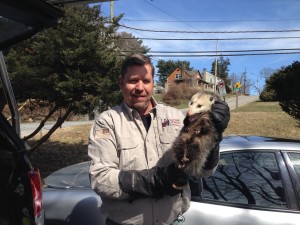